Freely transacting with one’s money is an ability many take for granted until it is stripped from them. As governments and banks around the world face economic desperation, citizens are increasingly subject to restrictions on transfers and withdrawals. Restrictions were applied in Cyprus and Argentina, resulting in a rise in demand for Bitcoin.

The continued mass monetization of government debt across the globe has led many to fear widespread inflation in coming years. As central banks buy their own government’s debt, interest rates have been pushed to near or below inflation. Bitcoin’s planned and publicly-known issuance schedule has become a welcomed alternative to politically-driven government fiat.

Recent months have been filled with discussions about citizens’ right to privacy from their governments. Bitcoin serves as a means of financial freedom, free of regulatory oversight for any reason. Donations to Wikileaks and a host of other entities fighting against governmental offenses have been made possible by Bitcoin. 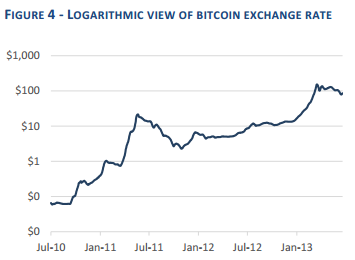 Global trading volume as a percentage of total market cap ended the first half of the 2013 at approximately the same level it started the year, despite the significant price gains. A significant amount of money has entered and remains in the market

The volatility in bitcoin exchange rates remains elevated relative to traditional currencies. In fact, at a recent average of 5%, intraday volatility has roughly doubled since the beginning of the year.

For the price outlook, please refer to page 8 of the original report.

Four exchanges with significant trading volume shut down. Bitcoin-24 (EUR/BTC) closed when their accounts where closed by German authorities. New York-based BitFloor (USD/BTC) shut down due to regulatory matters. Bitcoin Central (EUR/BTC) closed after being hacked. Canada’s LibertyBit halted operations after their bank closed their account.

New entrants have emerged with improved technology and compliance. TradeHill with focus on larger clients. And the writer is aware of three serious exchanges under development, of which two will launch to the public in 2013.
In addition there is an open source exchange project called Buttercoin and exchange provider Bex.io. Both will allow people to build a Bitcoin exchange.

Dominant market share of MtGox has been reduced from 80% to 65% for USD in the first half of 2013. With Bitstamp and BTC-E picking up. For EUR, MtGox holds around 70% and BTC-E 30% market share. 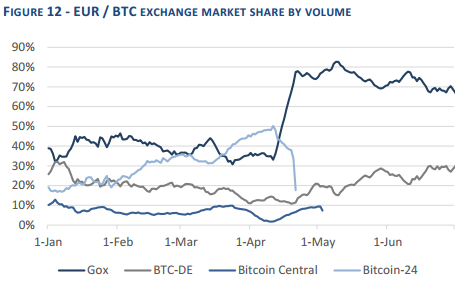 Bitmymoney notes that many MtGox EUR traders have switched to trading in USD with Bitstamp. Withdrawing EUR from MtGox is notoriously slow and more expensive than converting USD to EUR when withdrawing from BitStamp.

The delay and costs for withdrawing from MtGox also explain the recent continuous price gap of around $8 per BTC (!) between MtGox and Bitstamp.

The next version (0.9) will introduce a PaymentRequest with human readable service description (‘Hosting july 2013’), to be used by merchants. This PaymentRequest can also be used to implement recurring fees, with the wallet of the user automatically paying request that meet requirements accepted by the user (“from Wired, up to 80 millibit, max once a month”).

A refund address field can be set on a transaction. Since the “from” address, is not necessarily owned by the customer account paying from a hosted wallet. The wallet service can set the refund address to an addres linked to the user’s account.

The Financial Crimes Enforcement Network (FinCEN) issued guidance clarifying that bitcoin exchanges are considered Money Transmitters and are required to obtain proper Money Service Business licenses to conduct business in the US. Not only at the federal level, but with each state in which a company wishes to conduct business - a process costing millions of dollars and generally taking more than a year to complete.

As a result BitInstant has licenses in nearly 40 states and Tradehill partnered with MiiCard, an online identity service that aids in anti-money laundering (AML) and know your customer (KYC) data collection

Parallel to issuing the guidance, several businesses have been targeted legally for non-compliance. Among them was the Bitcoun Foundation.

Other countries have expressed less strict compliance. In Canada, the UK and Germany, Bitcoin is explicitly not yet regulated.

The bitcoin client was downloaded more than 1.5 million times between January and June, representing 48% of the 3.4 million total downloads over bitcoin’s four and half year existence. 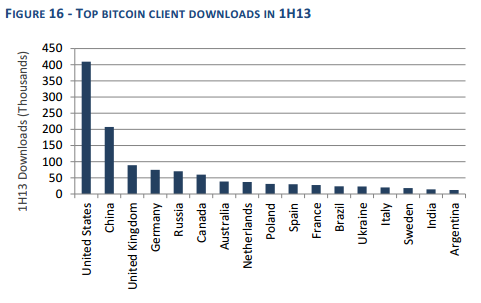 From the investment side, we do not foresee bitcoin being widely adopted by institutional players on a large scale over the coming months. We do expect more and larger retail players to enter the space, helping the value of the market continue to grow steadily.

The content above is only an abstract. Please refer to the original report.

We at Bitmymoney believe it’s important not to tell how cool Bitcoin is, but to show it! That’s why I invite you to join our video contest and show the world how Bitcoin could be used. The rules are simple: